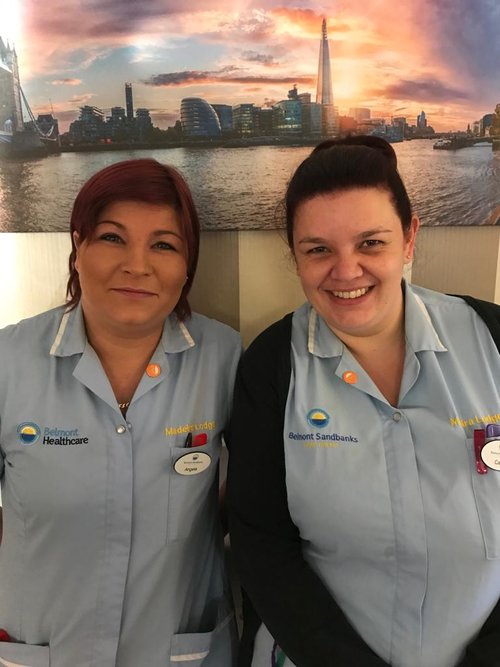 Well done goes Cathy Worman and Angela Smith who have been recognised as winners of the Champion of the Year Award during The Care Workers Charity awards this month.

The charity, which focuses on caring for carers in need, selected the Belmont Healthcare Group employees for their outstanding work as advocates and fundraisers for the charity in the New Romney area of Kent.

Commenting on their win, Adam Hutchison, the managing director of Belmont Healthcare Group says: “I couldn't be happier for Cathy and Angela. Both contribute extraordinary levels of dedication to not only their own roles within Belmont Healthcare but to raising awareness and funds for this extremely important charity for care workers.”

During 2018 both Cathy and Angela developed many events in aid of the charity but the most notable was the largest garden party Belmont Healthcare’s Madeira Lodge care home had ever seen. The event raised a massive two thousand pounds for the charity’s benevolent fund. In addition throughout 2018 both champions willingly shared their experiences as advocates for the charity in the hope to raise awareness and widen its appeal to potential volunteers and fundraisers like themselves.

The winners were invited to celebrate their achievements together at a traditional afternoon tea reception held at The Ned in Central London. The event was hosted by Richard Muncaster, CEO of The Care Workers Charity, its Head of Partnerships Alex Ramamurthy and Ben Allen, the Chairman of CWC and CEO of Oomph Wellness. “I warmly congratulate all of the winners. Your dedication and commitment in helping CWC grow and be heard doesn’t just produce fantastic results, it changes lives” said Richard Muncaster.

The Awards were introduced to acknowledge and reward the exceptional contributions of some of its most dedicated supporters; people whose help might otherwise go unrecognised.